Showing posts from October, 2019
Show All

The second instalment of why Scrum, why Agile? What to say to a CEO... “What do you want?” “I have an idea that could be valuable to the company.” “You have 60 seconds” “We have a lot of people working on the product, but [enter employee survey here] shows that they are unhappy. They are also very clever, yet [some percentage of projects - usually ½ to ⅔] of our projects are failing - costing us a lot of money and frustration. Moreover [some big competitor] are moving faster than we are. Many of our people don't know who they create value for or why. “This is caused by our big plans and need to control the process. “We could take a small, self-organizing team, with all the necessary skills and permissions, and start releasing customer value early and often. It’s called Scrum - I’ve seen it work at a start-up but it also saved [some competitor] from going under.” “What’s in it for us? Sounds like we would lose control” “Scrum would at least show up
Post a Comment
Read more

Why Scrum? Why Agile? The Cocktail Party Answer 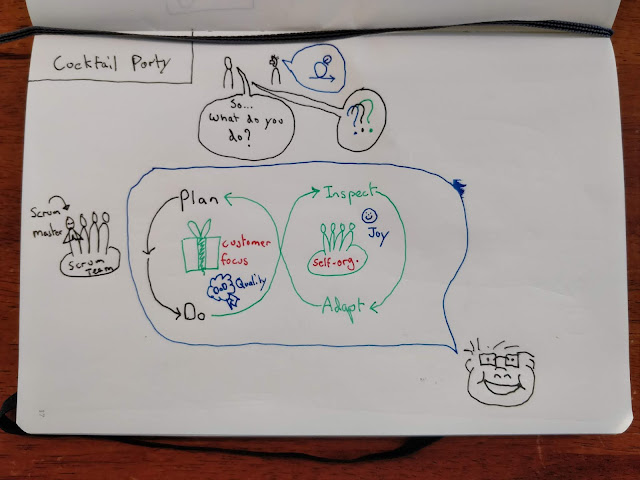 This series of blog posts is about giving answers to why Scrum and Agile exist. As a Scrum Master, I am regularly asked to quickly explain what I do, why the organisation needs me or what it gains from my presence. My answer is usually tailored to the person asking the question, here is an approach: Cocktail party answer: “So, what do you do?” “I’m a Scrum Master and an Agile Coach” “What’s that?” “It’s like a manager but with self-organising teams. The companies I work for are used to making big plans and then controlling all the steps of making a product. I help them to inspect and adapt their product and their organisation, continuously. It helps companies focus on their purpose and their customers, whilst their employees gain more enjoyment from delivering high-quality products.”
1 comment
Read more
More posts