June 27, 2014
Roughly translated as ‘every country has the government it deserves’ - I am getting used to the idea that this may be truer than even Joseph de Maistre may have meant.
I don’t just mean that all our politicians are power-hungry narcissists (something I might not deny), but I mean that humans have, throughout the ages, had leaders that have been created by their followers.  The leaders that floated up, simply had properties that made them buoyant in the social climate that they were in.
Usually this quote is used to complain about the corrupt nature of democracy, but that is actually not what I mean.  I mean it more as an emergent property of the masses, that leaders emerge simply because of certain properties (or perhaps lack thereof like ‘Captain Me’).
Perhaps this clip by ‘CrazyRussianHacker’ can explain what I mean.
Leadership

Why Scrum? Why Agile? My Sailing Friends 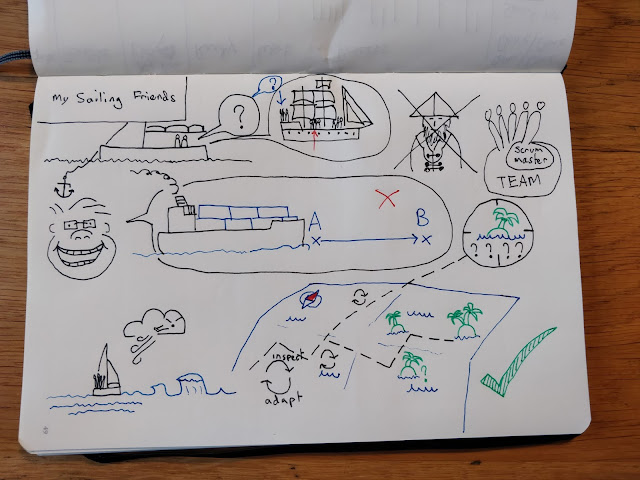 After a day's sailing, we've dropped anchor, cleaned the boat and poured ourselves a drink. “So - what is it you do again?” “I’m a Scrum Master.  It’s like the Master of Sail on tall ships.” “What - like the second-in-command?” “No, I don’t have a position in the hierarchy.  I just make sure the boat and crew are fit for purpose and help the sailors and staff understand what is going on.” “Why would an organisation need that?” “Many organisations approach products as if it were an industrial process like transport.  They load the cargo containers as full as they can get - calling it ‘scope’, then they plan very exactly how to drive from A to B to predict the costs and how long it will take to deliver. “For my clients, their product doesn’t actually match this industrial process very well.  I get them to think of it as if they were explorers trying to reach some distant shore. “They should pack very light and get great at teamwork so that they can travel
Read more